Livescribe sells notebooks, journals, sticky notes, and various other paper products for your smartpen. These products are all described generically as Livescribe notebooks.

To perform its many operations, your smartpen requires Livescribe Dot Paper.

The microdot pattern on each page is based on technology from Anoto AB. This dot pattern consists of small dots (100 micrometers in diameter) arranged with a spacing of approximately 0.3 mm. The dot pattern overlays an imaginary square grid. The dots are slightly displaced from the grid, with each dot in one of four possible positions, forming the proprietary Anoto dot pattern. 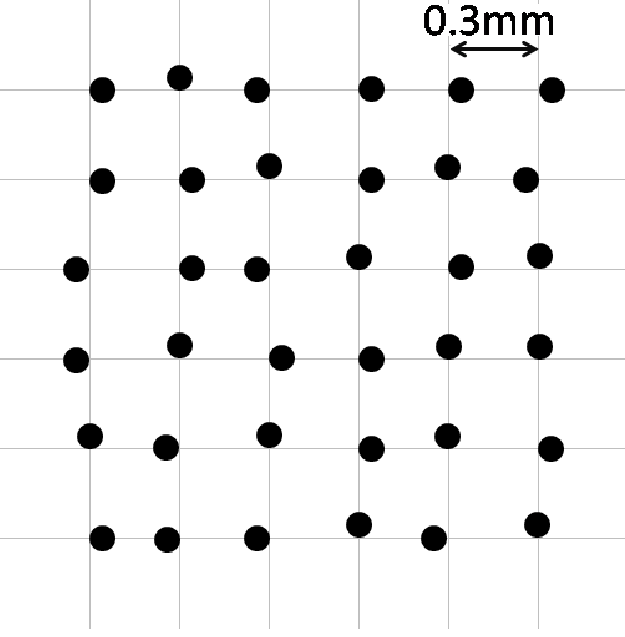 The dot pattern identifies the specific page and locations on the page of the notes you write. Your smartpen uses the dot pattern in a way similar to a geographical positioning system (GPS). But, instead of identifying locations on land, it finds locations on paper and stores your writing as digital ink using those locations. Using this patented dot-positioning system (DPS), the smartpen precisely tracks its own movement on paper. As a result, anything you write - words, numbers or drawings - can be stored, recognized, and intelligently responded to by the smartpen.

The area of the entire Anoto dot pattern is huge, and represents a piece of paper the combined size of Europe and Asia. Livescribe Dot Paper is based on a portion of this dot pattern.

When using a Livescribe Dot Paper product, follow these guidelines.

Note: The word "notebook" is used here for brevity. The same rules apply to all types of Livescribe Dot Paper products: notebooks, journals, flip notepads, sticky notes, and so forth.

Archiving a Livescribe notebook does the following:

For more details about how to archive, check the respective software application section in this support portal.

For example, you could archive a notebook that is partially completed, and then use the remaining pages as a second notebook. If you are using multiple computers to manage your smartpen data, be sure to archive your notebooks on all of these computers.

Each Livescribe notebook belongs to a group based on its format (lined, unlined, grid...) and form factor (notebook, journal, notepad …).

Using Livescribe notebooks with the same names and numbers

If you own two Livescribe notebooks with the same Group and Number (such as two Lined Notebook #3s), follow these guidelines:

Livescribe notebooks sold in a pack are from same group. For example, Lined Notebooks come in packs of four (Notebooks 1-4 and 5-8).

When you buy two or more packs of Lined Notebooks, verify that the Numbers on the Notebook covers are different. For example, buy and use Notebooks 1-4 and Notebooks 5-8 before buying another pack of 1-4 or 5-8. If you have purchased two packs with the same numbering, the packs have the same dot pattern. In this case, follow these guidelines:

Did this answer your question? Thanks for the feedback There was a problem submitting your feedback. Please try again later.
Last updated on August 4, 2021