How do I import notes and audio sent from Livescribe+?

Tap and hold on the Livescribe PDF file for a few seconds and then remove your finger or stylus.  Then choose "Open in Livescribe+".  NOTE:  Make sure the file has fully downloaded in Mail for the best experience.

Upon import, Livescribe+ will launch with the file in the full view window where you can view the notes and/or play the audio (for audio play back, tap on the green ink or use the play button).

If you close Livescribe+ and open it later, the file will be found in your "Livescribe PDFs" section of the main menu. 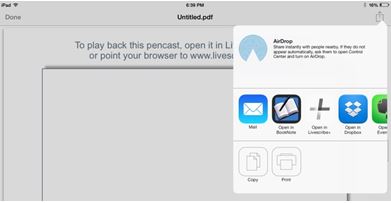 Did this answer your question? Thanks for the feedback There was a problem submitting your feedback. Please try again later.
Last updated on May 22, 2020